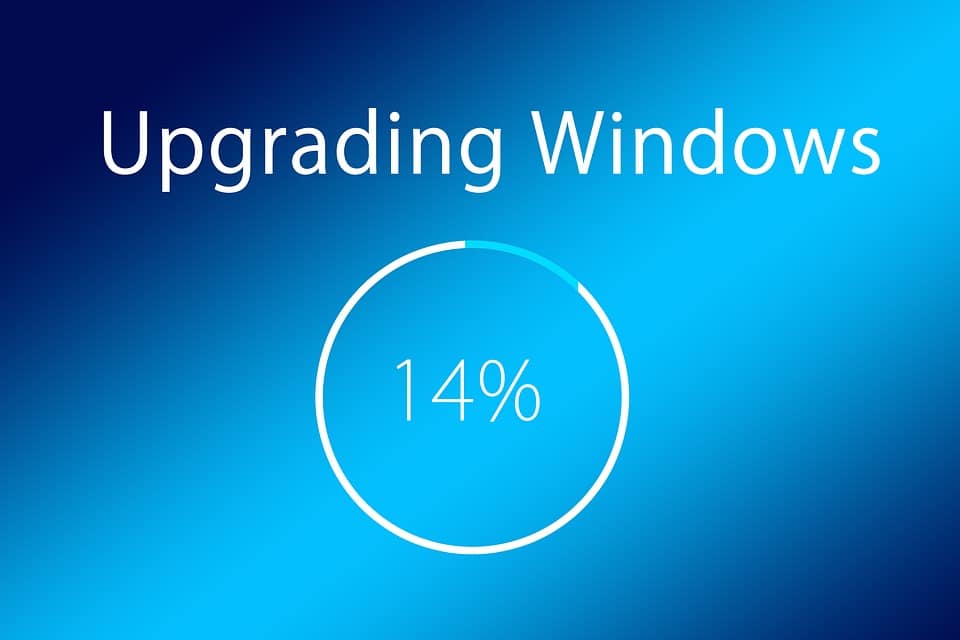 We can upgrade your current Windows 7 or Windows 8 to Windows 10 Pro or Windows 10 Home TODAY for a very competitive price. Our rates include FREE pickup and return of your PC or laptop.  There have been many articles written about how Windows 10 is a huge improvement over Windows 8.

And how anyone still using Windows XP should seriously consider coughing up for the new operating system. But what if you’re still happily using Windows 7?

Windows 7 is widely regarded as a more modern version of Windows XP. Fast, stable and with nothing that really needs fixing. In the past that has made the upgrade to Windows 10 a tough sell. However there are some very good reasons why you should give Microsoft’s latest version of Windows a chance regardless.

PC users have been running two or more apps side by side since Windows 1.0. But while Windows management has improved immeasurably since 1985, Windows 7 is still fairly simplistic in this regard.

Windows 10, on the other hand, makes it much easier to juggle multiple open windows when you’re working. Aero Snap now offers both half-monitor and quarter-monitor sizes when you drag a window to one part of the Desktop. But it will also offer other open windows to fill any open space automatically. 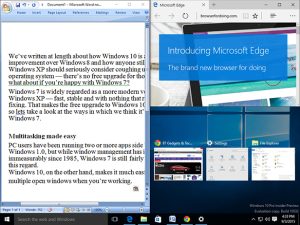 Better still, press [Windows] + [Tab] or the button on the Taskbar and Task View shows a much clearer thumbnail overview of your open windows. This makes Windows 7 take look primitive in comparison.

Best of all, Windows 10 Home & Windows Pro support multiple Desktops. This makes working with full-screen windows much easier when you don’t have multiple monitors — or even if you do. 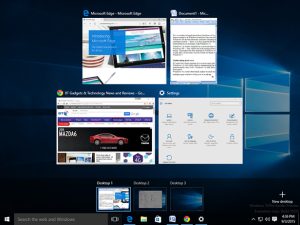 It’s always up to date

Much has been made of the way in which users can’t opt out of Windows Updates with the latest version of Windows. But that’s hardly a bad thing. Sure, a rogue update can certainly cause problems. But these are minor when compared to the benefits this new approach brings.

With Windows 10, it’s no longer possible to forget to run Windows Update. This means you’re much less likely to miss a critical operating system patch that fixes a serious security problem. In a world of ever-increasing cyber threats and activity, this reason alone should be a major factor in your decision of whether to upgrade to the new Windows. 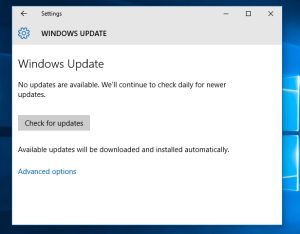 Even if you’re on the ball with security, other Windows users won’t be. People who switch off Windows Update in Windows 7 because they find it ‘annoying’, for example, pose a major security threat.

By forcing all Windows 10 users to stay up to date, everyone’s online safety is improved. Since it reduces the risk of a PC being compromised by a hacker. Or becoming part of a botnet that could be used to attack your PC.

Speaking of security, Windows 10 also improves the safety of your PC in other ways. It offers alternatives to a simple password, such as using a familiar picture. This makes it much harder for anyone to sign into your PC without your permission.

Windows 10’s new PIN system also means you can protect your Microsoft account with a long, strong and very secure password. But you can still use a simple PIN code to sign into your PC. And it only works on your PC. 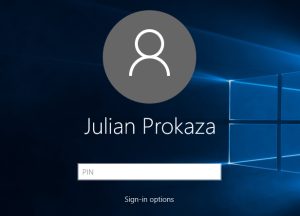 Switching to a Microsoft account also means any settings and saved passwords are also synced automatically to any other Windows 10 PCs you sign into using the same details. That means once one of your Windows 10 PCs is set up to your liking, your other machines will be too.

It’s the only way to enjoy new Windows features

Windows 10 has built-in support for things like Skype. But also includes its new web browser Edge, which Microsoft claims is up to 48% faster than Google Chrome.

Digital assistant Cortana is gradually improving with every update. While the Action Centre is a neat and tidy place to keep all of your notifications. 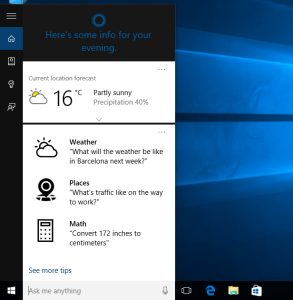 We appreciate that not everyone reading this will be interested in games. But don’t discount the new gamer-friendly features in Windows 10 just yet. It will be the only version of Windows that will work with Microsoft’s new HoloLens, for example. And if you’ve seen the demos of that new virtual reality headset, you’ll understand what a big deal it will be when it launches.

Parents with an Xbox One games console in the living room will also appreciate Windows 10. Since it allows games to be wirelessly streamed and played using a PC in another room. That means no more clashes with your kids when you want to watch a program.

Performance tests have shown that Windows 10 is faster across the board than earlier versions of Windows. Windows 10 boots, goes to sleep and wakes from sleep marginally faster than Windows 7 on a PC of the same specification. This means less waiting around when you want to do something.

Application performance is more of a mixed bag. Tests have shown Windows 10 Pro and Windows Home to be faster than Windows 7 with some apps and slower with others. Bear in mind that Microsoft will update Windows 10 regularly though. While Windows 7 is now essentially frozen in its current state after ‘mainstream’ support ended in January 2015.

Windows 10 Into The Future

There’s no doubt that Windows 10 will get faster once developers learn how to exploit its new features and optimise their software, too. Windows 7 won’t get this sort of attention for much longer of course. Not least since developers have already wrung out every drop of performance from this six-year old operating system.

Finally, Microsoft’s support for Window 7 will officially end on January 14, 2020. This means that in less than 18 months from now, Windows 7 will increasingly become a huge security risk.

We can upgrade your computer today to Windows 10 Home or Windows Pro for a very competitive price.

For a fixed flat rate of $170 we will backup the data on your current home PC, wipe and format your hard drive (this includes a check of your hard drive to ensure it is in a ‘healthy’ state), and install the latest full-version Windows 10. This fee includes free pickup & return of your machine.

We can also supply and activate your copy of Windows 10 for a very low $30, and can also supply third-party software (eg Office 2016) at a much lower price than you would commonly pay elsewhere (please contact us for a free quote).

Don’t risk your data with an out-of-date Windows XP, 7 or 8. Microsoft has already announced support for Windows 7 will end on January 14, 2020 and Windows 8 will eventually follow suit. After this time your machine will become a huge security risk from both hackers and viruses.

Call us today to book your Windows 10 upgrade.

In most cases, we can have your machine back to you within 24-48 hours.